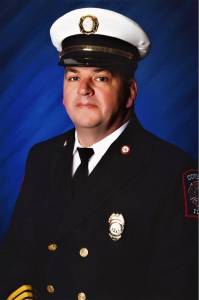 We are excited to announce the promotion of Deputy Chief Adam Rockich to the position of Fire Chief. Adam has been with the fire department since 1994, beginning as a dispatcher then hired as a part-time firefighter in 1996, promoted to full-time in 1997. He became a shift supervisor in 2001, promoted to Lieutenant in 2002, and Deputy Fire Chief in 2015.  Adam is a graduate of the University of Akron with degrees in fire protection and criminal justice along with additional training in fire instructor, fire inspection, confined space rescue, leadership, supervision, emergency management, and incident command. Adam also serves the community as a rescue diver, dive team coordinator, public education officer, a member of the Summit County Special Operations Team, training coordinator, operations officer, and served on medical assignment to the U.S. Marshal during Hurricane Katrina.  We are very fortunate to have such strong leadership in our Fire Department and look forward to working with Adam in his new capacity as Chief!